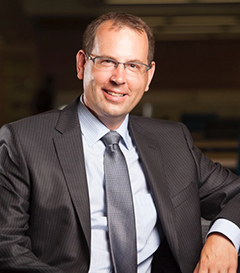 Erik S. Knutsen is Professor and Associate Dean (Academic) at the Queen’s University Faculty of Law in Kingston, Ontario, Canada. He has also taught in the Queen’s School of Medicine and as a core faculty member in Queens’ interdisciplinary Masters of Science in Healthcare Quality program. His areas of academic interest include insurance law, tort, accident law, medical malpractice, civil procedure and the civil litigation system. He is a co-author of Stempel and Knutsen on Insurance Coverage, one of the leading American insurance law treatises, and also co-author of Canadian Tort Law, one of the leading Canadian tort treatises. He has also co-authored the leading casebook on Canadian civil litigation and one of the core casebooks on American insurance law. His articles have appeared in top-ranked Canadian, American, and international journals. His work has been cited by Canadian, American, and European appellate and trial courts.

Professor Knutsen earned a Masters of Law (LL.M.) from Harvard Law School, a J.D. from Osgoode Hall Law School and a B.A.(Hons). from Lakehead University.He has presented his work at academic and professional venues in Canada, the United States, the United Kingdom, and China. He has given the keynote address at the Advocates Society’s annual conference, presented his work on costs at Oxford University, and has given the Canadian Studies Visiting Lecture at Fudan University School of Law in Shanghai, China. He also has been involved with judicial education at programs provided by the National Judicial Institute. He is frequently contacted by national and international media.

Professor Knutsen has three times earned the faculty teaching award at Queens Faculty of Law and was awarded the Queen’s University Chancellor A. Charles Baillie University-Wide Teaching Award in 2018. He was previously a Visiting Assistant Professor at Florida State University College of Law, where he also earned a teaching award. He has practiced tort and insurance litigation in Thunder Bay at Carrel + Partners LLP, in Toronto at Fasken Martineau LLP, and in New York at Paul, Weiss LLP where he assisted with 9/11 World Trade Center cases. He is a member of the bar of Ontario, Canada. Professor Knutsen regularly consults with lawyers on cases heading to trial or appeal, including cases at the Supreme Court of Canada and the Supreme Court of the United Kingdom.

This book covers everything from the basic insurance concepts, principles, and structure of insurance policies to today's most complex issues and disputes....Buy now!