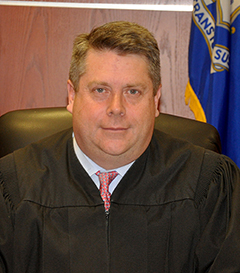 Judge Eliot D. Prescott currently serves a judge on the Connecticut Appellate Court. He was born on January 21, 1965 in New Bedford, Massachusetts.  Judge Prescott attended St. George's School in Newport, Rhode Island, and received his bachelor of arts from the University of Massachusetts at Amherst in 1988. He graduated with high honors from the University of Connecticut School of Law in 1992.

Following law school, Judge Prescott served as the law clerk to the Honorable David M. Borden on the Connecticut Supreme Court. He also worked as an associate in the Washington, D.C. office of Fulbright & Jaworski, LLP.

In 1994, Judge Prescott began his service as an Assistant Attorney General in the Office of the Attorney General. In 2001, he became the Department Head of the Special Litigation Department within the Office of the Attorney General, where he supervised lawyers, accountants, paralegals and other support staff. During his tenure as an Assistant Attorney General, he represented the State of Connecticut in complex litigation matters in state and federal court, and argued more than twenty-five appeals in the Connecticut Supreme Court, Appellate Court and the United States Court of Appeals for the Second Circuit. In 2002, he received the "New Leaders of the Law" award from the Connecticut Law Tribune for outstanding government service.

Judge Prescott was appointed to the Superior Court by Governor John G. Rowland in 2004. During his time as a trial judge, Judge Prescott presided over Part A and Part B criminal trials and civil matters in various locations around the State. He also served as the Presiding Judge of the Administrative Appeals and Tax Session of the Superior Court. He currently is a member of the Connecticut Evidence Oversight Committee. He served as a member of the Rules Committee of the Superior Court and the Advisory Committee on the Appellate Rules. On numerous occasions, he has served on the faculty of the annual Connecticut Judges' Institute.

Since 1998, Judge Prescott has been an Adjunct Professor of Law at the University of Connecticut School of Law, where he teaches administrative law. He is the author of two legal treatises: Connecticut Appellate Practice and Procedure (ALM), and Tait's Handbook of Connecticut Evidence (Wolters Kluwer).

Judge Prescott was appointed to the Appellate Court in 2014 by Governor Dannel P. Malloy.

This book, from an expert on the topic, provides a complete and balanced picture of all the law affecting the admission of evidence in Connecticut courts.