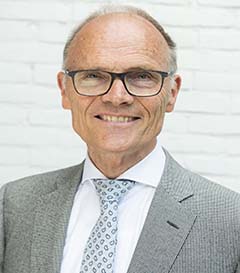 Derk Visser studied physics and worked at Philips Electronics as researcher and developer for about ten years.

In 1990 he moved to the patent department of Philips Electronics, where he obtained the Dutch and European qualifications.

He published the first edition of his book The Annotated European Patent Convention in the spring of 1994.

In 2005 he moved to the London firm EIP, where he became partner and since 2016 of counsel. His practice focuses on legal advice work. Derk is actively involved in training students for the eqe all over Europe.

In 2020 Derk Visser was presented with a Lifetime Achievement Award in recognition of his outstanding contribution to European patent law at the Managing IP Awards in London.

The 2021 edition of this preeminent work – the only regularly updated authoritative article-by-article commentary in English on the European Patent Convention (EPC), and case law....Ready for pre ordering!

About this book: PCT Strategy and Practice, a first-of-its-kind book on the Patent Cooperation Treaty (PCT), furnishes an in-depth explanation of carrying out the treaty&rsquo;s procedures, from filing a single international patent application to starting prosecution before a plurality of national.