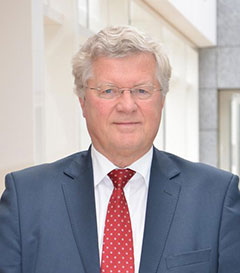 Bob Wessels is an independent legal counsel, advisor and arbitrator with over 40 years of experience. After having been a law professor for over 25 years he retired in 2014. Professor Wessels is still involved in many counsel, research and teaching activities.

He acted as international consultant to the IMF, the World Bank and the European Commission in matters of resolution, rescue and insolvency of businesses. He advises with legal opinions or acted as an expert witness in European or international insolvency related questions in Dutch courts as well as in the courts all around the world.

Other (past) activities: Deputy Justice at the Court of Appeal in The Hague (1988-2016); Member of the Joint Board of Appeal of the three European Supervisory Authorities (ESAs; ESMA, EBA and EIOPA respectively) (since 2013); past Chairman of the Netherlands Association for Comparative and International Insolvency Law (NACIIL) and past Chairman of the Academic Forum of INSOL Europe.

Professor Wessels published hundreds of articles in leading legal journals and (co-)authored some thirty books. Since 1999 he is the single author of Wessels Insolventierecht (Wessels Insolvency Law), a 10 Volume series, published by Wolters Kluwer.

Business and Bankruptcy Law in The Netherlands, Selected Essays

This work contains a collection of seminal essays on topical issues in Dutch business and bankruptcy law. The articles survey a range of commercial law subjects, including contract, competition, insolvency, corporate, banking and financial services